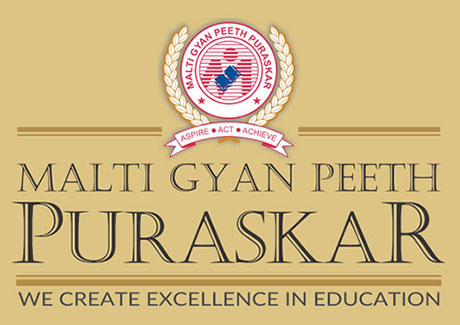 Eminent Jury conducted the interviews of 75 candidates shortlisted by DPI Secondary Education, Punjab, on Friday, April-07, 2017 at PHDCCI Auditorium, Chandigarh. Written test & viva conducted by subject experts, was part of the process. Jury unanimously arrived at the results & announced at end of the day. Each of 15 outstanding teachers for 9 subjects are getting Rs. One Lakh, Robe of Honour and Certificate of Excellence, being presented by Shri Pranab Mukherjee , Hon'ble President of India at Rashtrapati Bhawan, New Delhi, on Monday, May 29, 2017. This ceremony would be part of respected Mata Ji, Smt. Malti Mohinder Singh Syngle's 96th Birthday celebrations. 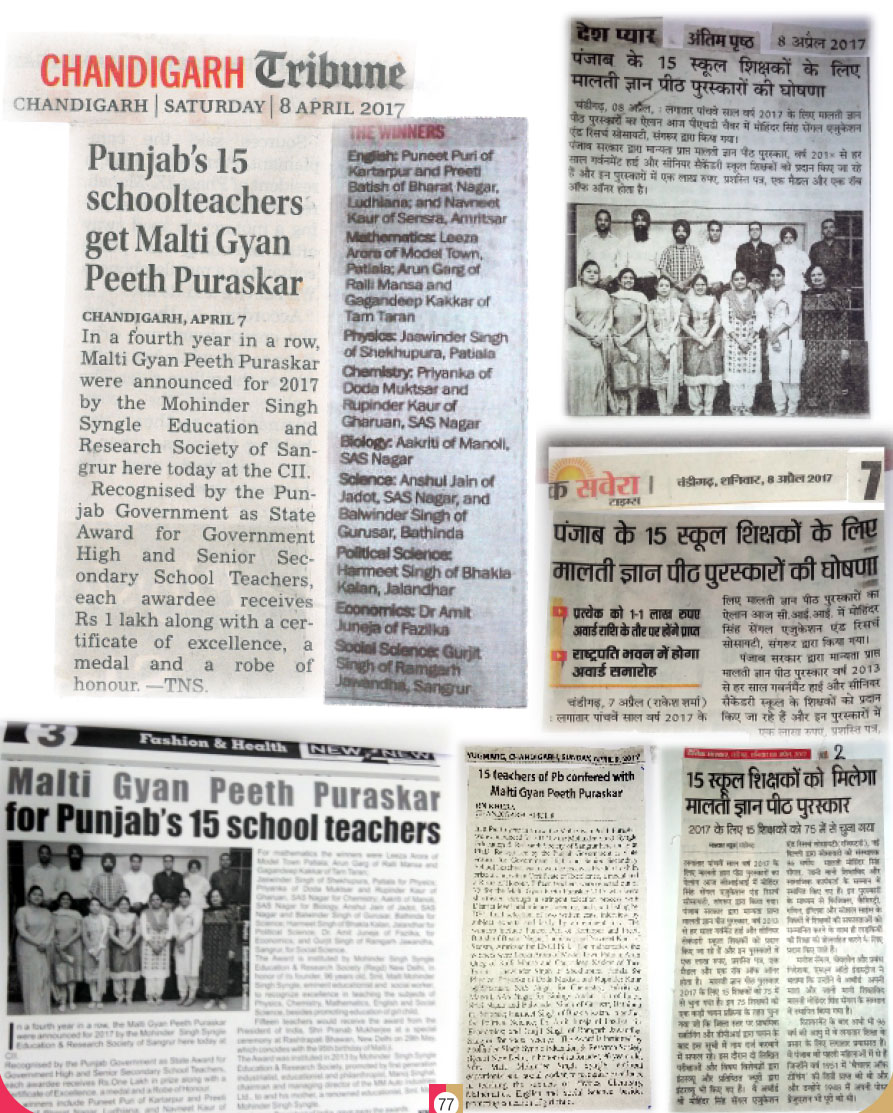 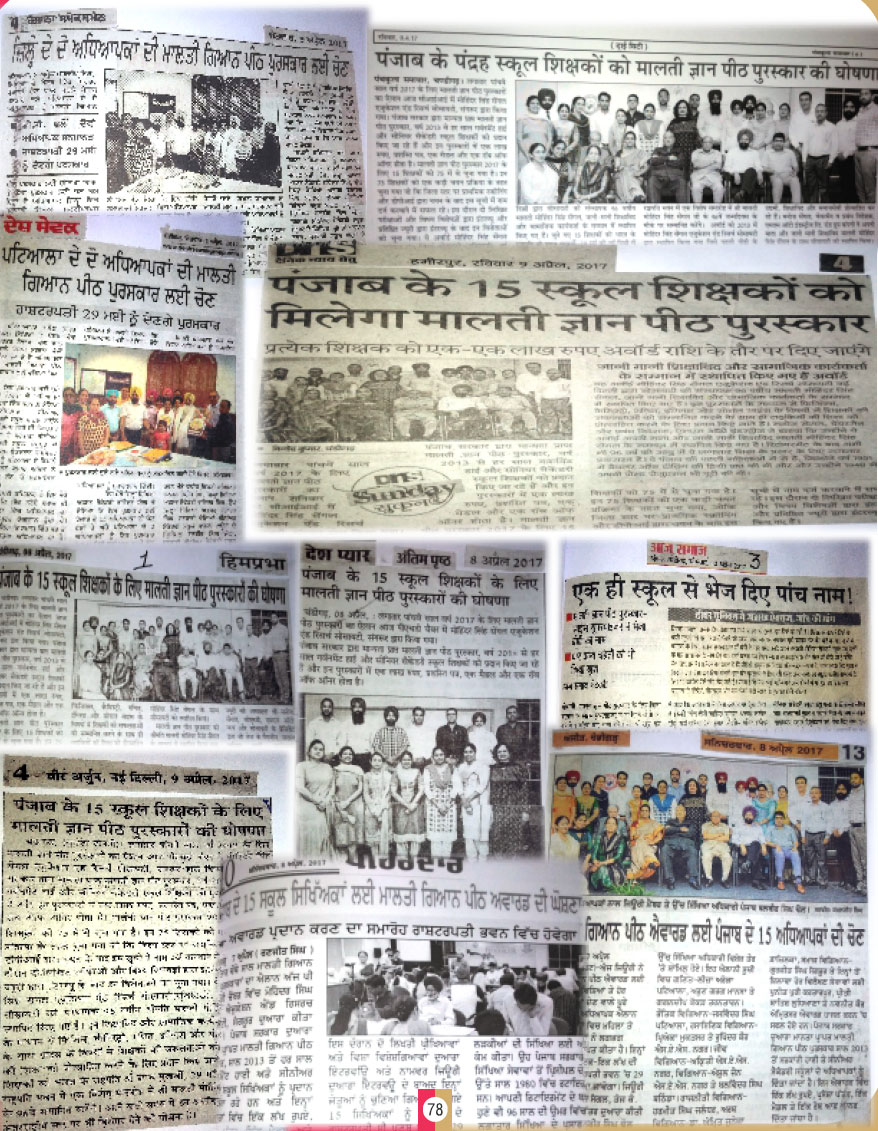 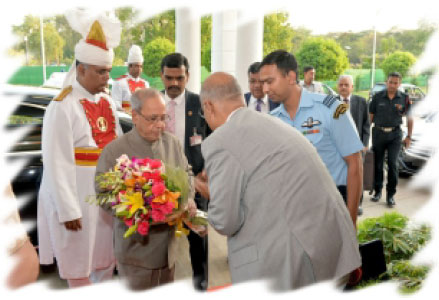 Malti Gyan Peeth Puraskar-2017, Fifth Edition was presented at a glittering ceremony by Hon'ble President of India, Shri Pranab Mukherjee, at Rashtrapati Bhavan Cultural Centre Auditorium, to 15 Outstanding Teachers. Each year the Award Ceremony is part of Respected Mata Ji Smt. Malti Mohinder Singh Syngle's birthday. The auditorium was jam packed at 5.30 pm. Dignitaries occupied the dais by 5.45 pm, each one of them wished Respected Mata Ji, who was already seated on the dais, a Very Happy 96th Birthday.

The program was perfectly conducted by well known anchor and erstwhile english news reader of doordarshan, Ms. Sukanya Balakrishnan. The MOC announced : "The Hon'ble President has arrived". Shri Manoj Singhal received him at the entrance after presenting a bouquet, escorted the President to the dais. Soon the special Army Band played National Anthem and all audience present stood up. 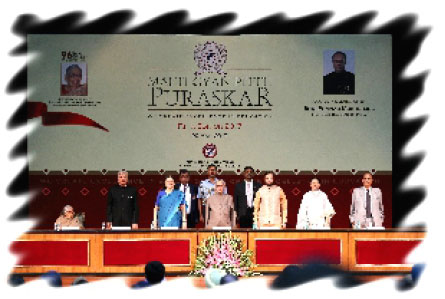 Smt. Aruna Chaudhary, while speaking on the occasion greeted Respected Mata Ji on her 96th Birthday, highly appreciated the mother and son duo for instituting Malti Gyan Peeth Purasakr and congratulated Teachers for achieving Awards. She mentioned that the aim of Punjab Govt. is to strengthen primary level education, especially in border areas, so that students get strong educational foundation in the beginning itself which will help them to pursue higher studies with ease. She praised

Mr. Manoj Singhal for his philanthropic initiative forthe cause of quality education.

Dr. K. K. Paul, greeted Respected Mata Ji and complimented Shri Manoj Singhal for instituting the Award. He mentioned that Awardee Teachers are fortunate enough to receive the Award from Hon'ble President, who himself is a great Scholar and academician. Dr. Paul said he follows speeches of Hon'ble President as part of his regular learning.

Shri Prakash Javadekar highly appreciated the initiative taken by the Society for establishing educational campus in rural area and instituting Multi Gyan Peeth Puraskar to promot quality education. Shri Javadekar complimented Shri Singhal for his philanthropy and innovative approach. Shri Javadekar mentioned National Education Policywas under review and all the loose ends in the present system would be tightened. He said discussions are being held with all the States and leading academicians. Final policy would be formulated after consensus with all the stake holders.

Smt. Maneka Sanjay Gandhi, greeted Respected Mata Ji and congratulated Teacher Awardees. She mentioned that the Society is an NGO , serving the cause of education with its own funding and all this is possible due to large heartedness of Shri Manoj Singhal.

After the speeches of the dignitaries, the Hon'ble President was requested to present the Awards to 15 Outstanding Teachers, 8 of them were women and 7 gents, dressed up in traditional colourful attire, came one by one to the dais in a ceremonial formation, bowed before the President, received the decorative scroll containing the award and went back to their respective seats in an orderly manner.

Soon after the President was requested by MOC for his Presidential Address. The Hon'ble President!, to begin with, greeted Respected Mata Ji on her Birthday and wished that she lives more than 100 years in good health. He appreciated Mr. Manoj Singhal in instituting the Award and rendering valuable services to the community, especially in the field of education. Highlights of Presidential address are reproduced in this chapter.

The President was profusely thanked for his generosity, by gracing the function and presenting the Awards for 2nd consecutive year, by Shri Tarlochan Singh. He thanked all the dignitaries on the dais, distinguished guests in the audience, Officers & Staff of Rashtrapati Bhavan and Shri Manoj Singhal for his untiring efforts to make the Award Ceremony a grand success.

The function came to a close after the National Anthem, with clockwise precision exactly at 7 pm and the Master of Ceremonies requested all the guests to proceed to Ceremonial Hall for Hi-Tea. Simultaneously photo session were held with the President as scheduled. 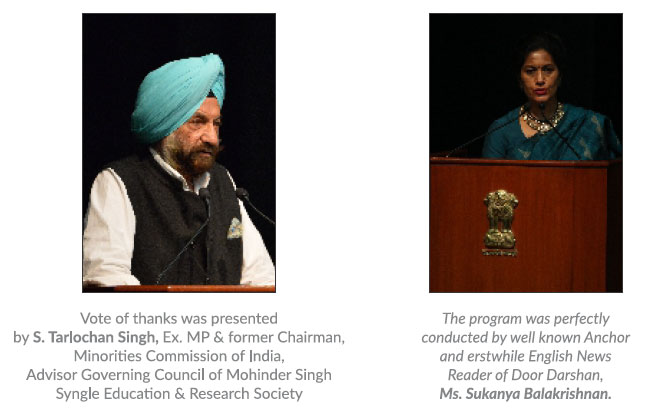 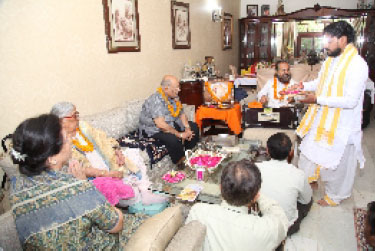 Monday, May-29, 2017 was a red letter day for MM Auto Parivar, which will be remembered fora long time to come. Every Parivar member was in a festive mood to celebrate 96th Birthday of the affectionate Mother of the Parivar Smt. Malti Mohinder Singh Syngle, fondly known as Respected Mata Ji. Right from morning itself, large numbers of well wishers, friends, relations including Teams from Manesar & Haridwar Plants, as well as team from Sangrur educational campus, visited Chittaranjan Park Residence, who wished and conveyed greetings to Respected Mata Ji by presenting Bouquets and going thru the cake ceremony. Traditional Pooja and Havan were performed as part of celebrations. Respected Mata Ji blessed every one and was all smiles.

Prayers were held for her good health, long life and continued guidance to the Parivar and celebrations took place at Manesar & Haridwar Plants and Sangrur Educational Campus. 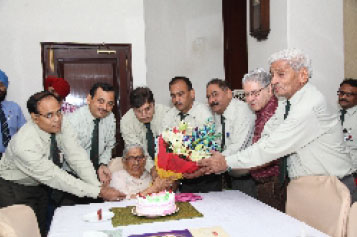 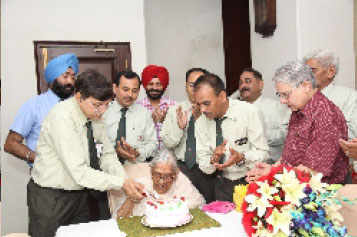 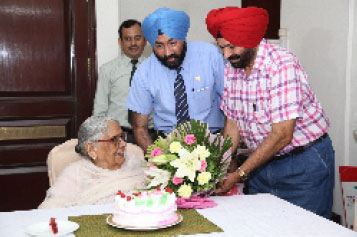 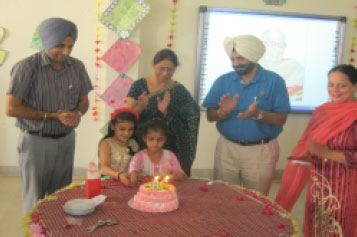 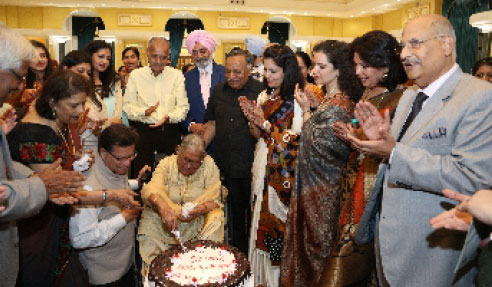